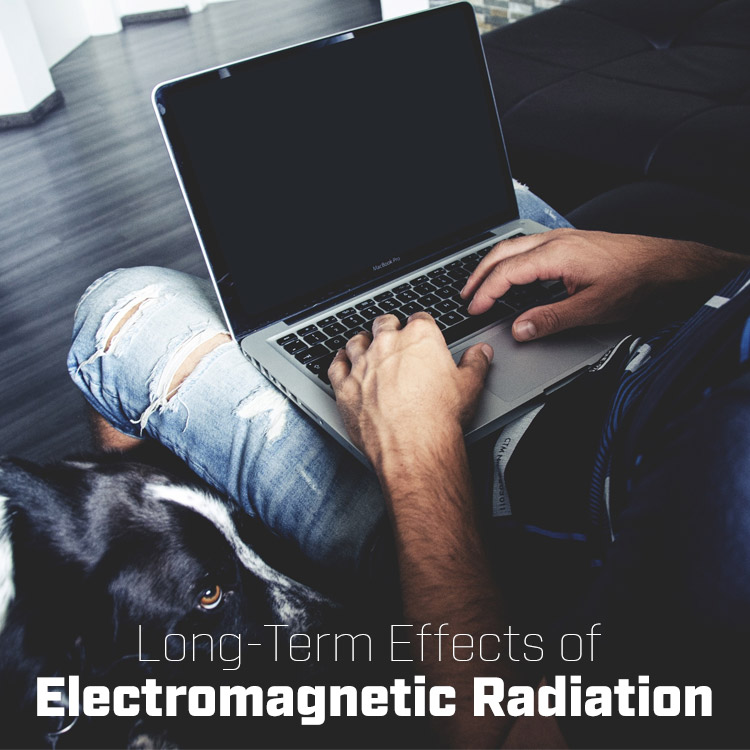 Electromagnetic Radiation (EMR) has become very much part of our daily lives. We are constantly being exposed to Electromagnetic Fields (EMF) and this exposure is continuing to grow by leaps and bounds. As electricity became a fundamental part of our lives, we have been living close to electric and magnetic fields as a result of electrical lines that surround us.

EMR/EMF can be very dangerous to human health. For example, microwaves have been found to be capable of heating the human tissue and causing damage. But it was also found that small amounts of microwave energy can oscillate the genes and DNA without the cells. This means that the body can be penetrated easily placing EMR inside you rather than around you.

A couple of decades ago, we were subjected to EMR from power lines, transformers, florescent lights, microwave ovens, hair dryers, TVs, etc. Today, laptops, tablets, cell phones, and smart wearable devices are also added to an ever growing list of gadgets that emit EMR. So if you haven’t heard about EMR before, there is no time like the present to become aware.

As technology becomes a part of every aspect of our lives, we are continuously being exposed to EMF at home, at work, and in the car. It creates a never ending cycle of exposure all year round. The long-term effects of EMR have been studied for a while now and experts believe that repeated exposure can result in various ailments such as the following:

When we are exposed to EMR repeatedly over an extended period of time, tissue damage can occur as electrons are released into cells. This process is called ionization. The investigation into the long-term effects of exposure to EMR has been going on for about two decades. Time and time again, researchers have found that EMR has a negative impact on health.

However, Federal regulation has only been concerned with short-term exposure to cell tower radiation. It essentially overlooks all the findings that state that exposure to non-thermal levels of cell phone radiation will results in damaging bio-effects in the long-term.

To focus on the big “C” word, according to a study conducted on EMF and tumor promoting exposure, “numbers of tumors of the lungs and livers in exposed animals were significantly higher than in non-exposed controls. In addition, lymphomas were also found to be significantly elevated by exposure.” Researchers in the study used exposure levels that were significantly lower than government-allowed SAR values. As a result, this means that cell phones emit more radiation than the amount that was used in the study. Further, “many of the tumor-promoting effects in our study were seen at low to moderate exposure levels (0.04 and 0.4 W/kg SAR), thus well below exposure limits for the users of mobile phones.”

Especially when it comes to cell phones, they are considered to be more dangerous as a result of microwave range waves regularly placed next to body. Further, 20-80% of the radiation from the antenna penetrates the brain by a couple of inches. There is also a recurring theme of individuals who sleep with the phone next to the bed who have deprived sleep. This in turn affects the memory and impairs learning. Unfortunately, to find out the long-term effects, more research needs to be conducted and more time will have to pass.

A smaller number of studies have found that a possible link with EMR and the environment. In one such study, scientists found that bees did not return to their hives when mobiles phones were placed close by. This suggests that EMR has a significant influence in colony collapse disorder. Further, researchers in the Netherlands found that Wi-Fi may be linked to leaf damage. But as these are preliminary studies, the results are still viewed as inconclusive and more research will be required to better understand this phenomenon.

While local and federal governments are still far off when it comes to regulation and legislation, the World Health Organization has gone on to classify radio-frequency EMR as “possibly carcinogenic to humans” based on the limited evidence gathered so far that links cell phone use and higher risk for glioma, a malignant type of brain cancer. As more time is needed to identify concrete associations between EMR/EMF and cancer, researchers will continue to closely monitor this link. Time and time again, several studies have found the same association between heavy cell phone use and cancer, but only time will tell if there will be a change in legislation.

According Joel Moskowitz (director of the Center for Family and Community Health at the University of California-Berkeley), there are several studies looking into cell phone EMR and cancers. The studies funded by mobile phone companies are not well funded and usually don’t make this link. On the other hand, public or foundation funded studies have found the opposite to be true. As a result, there are still a lot of issues to be cleared up to arrive at a universal consensus.

As all electronic devices emit some form of EMR, it is imperative to continue to study its impact on human health. But in the meantime, there are options to keep you and your family safe. By using a physical shield as a barrier between you and the EMR emitting device, you can protect yourself from the harmful effects of EMR. Products like those from HARApad, were specifically designed to safeguard you from your device.

As we become more dependent on technology and make all our devices smart, it is also important to take all the precaution necessary to stay safe from electromagnetic radiation.

What has your experience with EMF/EMR been over the past decade? Please submit a Comment below.